A few words about the history of Kimolos

Kimolos or Arzantiera (grey-white rocks) or Echinousa (island of the sea urchins) lies in the southwestern part of the Cyclades. Many small uninhabited islands, such as Rematonisa, Klimatonisa, Prasonisi and Agios Efstathios and the largest island, Polyaigos, belong to Kimolos. It is a volcanic island and is rich in industrial minerals, mainly bentonite, pozzolan (white cement), perlite, kaoline (porcelain) etc and "Kimolian Earth", a type of clay with detergent and pharmaceutical properties which should not be confused with the better-known blackboard chalk (despite being somewhat alike in colour and texture). The island also has semiprecious stones such as quartz, amethyst and opal.

The ancient city, before it sank, was situated in the area now known as “Hellinika” on the west side of the island. What remains of the ancient town is now to be found on the islet Agios Andreas, opposite Hellinika, and the ruins of houses and tombs have been found on the seabed in that area. Archaeological finds indicate that Kimolos has been continuously inhabited from at least the Late Neolithic Age. Our rich Greek imagination has given birth to the legend that the island was named after its first inhabitant, Kimolos, who was married to Taurus’ daughter, Sidi. 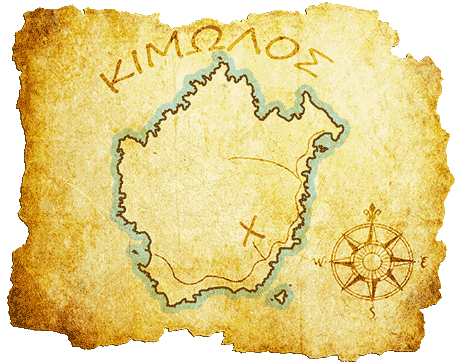 In the 5th century, BC Kimolos was part of the Delian League, and its organisational structures were modelled on Athenian democracy. There was a parliament and a municipality, and authority was exercised by three archons and three treasures. The patron saint was Athena, and Artemis, Hermes and Poseidon were also worshipped. In the 3rd century BC, Kimolos introduced its own currency, an opportunity provided by the huge exports of Kimolian earth and of the island’s excellent figs. The dispute between Kimolos and Milos for possession of Polyaigos and the nearby small islands started in 416 BC and came to an end sometime after 338 BC following a decision by the court of the Argives. Kimolos was declared victorious and it maintains this right until the present day.

The island has an area of 36km2 and is shaped like a regular pentagon. It only has one village with approximately 800 permanent residents, many of whom are pensioners. Young people are mainly employed in mining, trade and fishing. Others are sailors or craftsmen, and almost everyone is also a farmer.

The combination of white and blue, views of the mountains and of the sea, and friendliness and personal care are just some of the characteristics that set Faros Studios apart.

We have six rooms which sleep 2-3 people, and we are ready to welcome you and to offer you high quality holiday care and service.